Skip to content Skip to navigation
Everything you need to know during COVID-19 Free shipping on orders over $50.
Change language
Français

To celebrate MEC’s 48th birthday and Mountain Days, we dug up some of our favourite nuggets and facts from the last 4 decades of the Co-op, plus some stellar throwback shots (they’re just too good not to include). Enjoy!

If you lined up all 5.4 million MEC members…

… from fingertip to fingertip along The Great Trail (a.k.a. the Trans-Canada Trail), we’d stretch from Vancouver to the province of Quebec (!). Of course, a big chunk of us would need to line up in canoes or kayaks on the waterway sections of this epic route, but we’re pretty confident we’d be able to find members who’d be keen.

This van was our original store

MEC was doing #vanlife before hashtags were even a thing. The idea for MEC started in a storm-battered tent when a small group of students agreed they needed a place to buy specialized climbing gear. On August 2, 1971, Mountain Equipment Co-operative was officially born. Early members would drive up in the van to show off new gear at Varsity Outdoor Club and Alpine Club meetings.

Ever wondered how your taste in Clif Bars compares to everyone else’s? If you’re a fan of classic chocolate chip, then you’re in good company – it’s the most popular all-time flavour for MEC members.

But are tastes changing? When you look at the 2018 numbers, chocolate brownie was tops in Canada. And so far in 2019, white chocolate macadamia nut is leading the way, with chocolate brownie an extremely close second. Who knows what flavour will rule supreme next?

Portaging to stores since 1985

Toronto – did you catch a glimpse of a canoe heading straight for the new MEC Toronto Flagship store at Queen and Soho? This cross-town portage was straight out of the MEC history books.

The backstory comes from 1985, when we moved our Toronto store to a location only a block away. “In the process of moving,” we noted in our 25th anniversary catalogue, “we treated bemused Torontonians to the sight of several canoes being portaged up Yonge Street by staff.” It only seemed right to recreate a slice of history to celebrate the opening of the new MEC Toronto store, and the Queen Street Portage was born.

MEC Toronto may be our first flagship store, but it won’t be our last. MEC Vancouver is relocating in late 2019 and this new space is also designed to be a flagship location. Watch for a West Coast canoe portage coming your way.

Sometimes things get weird (in a good way)

And the fun factor is still going strong:

We may have gotten a little excited about reaching 100k followers on Instagram today. Huge thanks to our community for the inspiration and for always keeping it real 🙌 And big congrats to @jacjacjacr for being our 100,000th fan, we have a $100 gift card with your name on it! 😄💯#goodtimesoutside 📸 by @stevetan 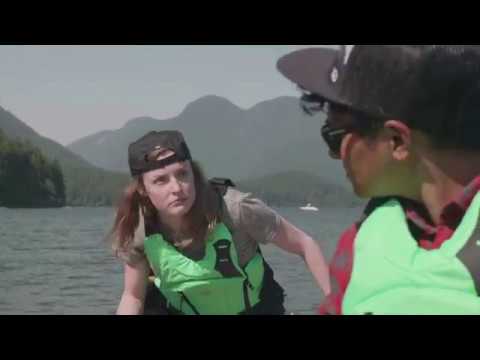 When products get shipped from factories, they usually come in plastic polybags, which is a huge waste. So since 2010, we’ve been ditching individual plastic bags for as many MEC Label items as we possibly can – jackets, hoodies, leggings – and rolling them into neat little bundles instead (we call them sushi rolls).

The result? Over 15 million plastic polybags out of the landfill, which translates to a whopping 150 tonnes of plastic. Plus, we can fit more rolled items than folded ones into each box, so it cuts down our carbon footprint too.

And we still really love climbing

Climbing legend Tommy Caldwell on his recent visit to MEC.

Our original 1972 one-page price list included ropes, ice axes and biners – and climbing is still a huge part of what MEC is about. Today, your Co-op has the largest selection of climbing gear in Canada, a sweet roster of climbing ambassadors, community partners like the Alpine Club of Canada and the ACMG, and so many #mecstaffer climbing crushers.

Just recently, Tommy Caldwell stopped by to share stories with members (and sign the wall at our head office bouldering cave), and Desi pop artist and avid climber Hatecopy led a chat at our North York store. We’ve also signed on to be the founding partner of Climbing Escalade Canada. Keep an eye on any Canadian climbers at the 2020 Olympics in Toyko; they’ll be sporting MEC Label jerseys.

Members are deeply attached to pants

Ahhhhh MEC Rad Pants. An old catalogue touted they were “baggier than a Shar-Pei puppy, with more pockets than a paratrooper’s jump suit, indestructible, fly-free and relentlessly unisex.” Introduced in 1989, they were discontinued in 2001, brought back a season later because members were asking for them, then were finally relegated to the pant archives.

Until 2019. Because Rad Pants returned – again. We released a limited run with a hefty dose of nostalgic fun on April 1. “Is this real, or is an April Fool’s Day joke?” some members asked. We assured them that it was indeed real, and the pants were just as rad as ever. The design was the exact same as previous Rad Pants and they even featured the original MEC logo. The only thing that had changed was that the new fabric was bluesign-approved®.

It was a huge hit. Members scooped up nearly the entire run of Rad Pants in about a day and a half.

Will Rad Pants reappear again? Let us know if you want to see them again… after all, that’s worked before.

In the meantime, if you’re looking for a modern evolution of the Rad Pants, check out the MEC Wanderwall Pants (women’s) or the MEC Mica 2 Pants (men’s).

Bring us your busted tent poles, stuck zippers and ripped jackets. Our early records are spotty, but we know we’ve been patching up gear for a long time. Since we got our record-keeping in order, we can proudly say that we handled more than 120,000 repairs from 2005–2018 (over 11,000 last year alone!).

A $250K grant from MEC, $140K in donations from members (also matched by MEC up to $100K), and funding from other groups allowed The Land Conservatory to purchase land to keep Skaha access open to climbers and park users. Photo: MEC Ambassador Josh Lavigne at Skaha’s scenic crags.

If you’re a climber, you’ve likely heard of BC’s Skaha Bluffs. But what you may not know is that MEC members and the Co-op’s community program played a huge role in keeping access to this important area. In the early 2000s, the only access was through a privately-owned property, which was at risk when it was up for sale. Solution? MEC and members helped buy it to keep access open to climbers – for good.

For Skaha beta, check out Skaha Rockclimbs: A User’s Manual.

If your kid was in the first Happytrails carrier, they can vote by now

They grow up so fast. Digging through the archives, we found out that the MEC Happytrails Child Carrier has been going strong for about 19 years… which means the first kiddos who rode in these packs are now old enough to cast ballots and buy beer across Canada.

“We bought our Happytrails carrier through Craigslist,” MEC staffer Brock said, “and the people we got it from told us they’d also bought it secondhand… in every city, there’s probably a bunch of these carriers that just keep getting passed on every couple years or so.”

and speaking of Craigslist – our online gear swap is even older

Way back in 1998, a little thing called the MEC Online Gear Swap was born as a place for people to sell and buy used gear and find trip partners (as part of mec.ca). By 2005, it boasted more than 21,000 posts, and it pre-dated craigslist.ca and kijiji.ca in the world of scoring online deals for used outdoor gear. While Kijiji and Craigslist have certainly surpassed our online gear swap site now, it’s fun to know we were first. 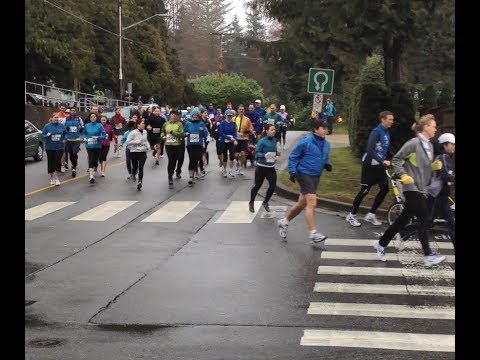 The first road race is off! Forgive the portrait-mode; it was 2012 and we didn’t know better.

The first-ever MEC road race happened in 2012. “It had no more than 150 people registered, and one of the staffers running it got lost,” recalls the race director. Was the course marking a little light? “Just at one critical turn, debatably. Debatably because I marked the course – I got up at 1:30am and drove around dropping pylons for 4 hours. I thought it was one of the best marked courses I’d seen.”

From these humble beginnings, the events program has grown big time and is now part of MEC All Out. Last year, over 94,000 people participated in MEC races, festivals, century rides, triathlons and clinics. If you haven’t tried a race yet, go for it! We promise lots of great course markings these days, along with bananas at the finish.

BYOB for a decade and counting

In 2008, we eliminated all single-use bags from our stores. Since then, we’ve kept over 30 million single-use plastic bags out of landfill to date. Whoa.

Back in 1990, to test the prototype of a 4-season MEC tent, we rented an airport runway and bolted the tent to a wooden platform on a truck. Then we drove as fast as possible until the tent failed. Things have gotten significantly more sophisticated since – now we have access to a sweet wind lab to test tents: 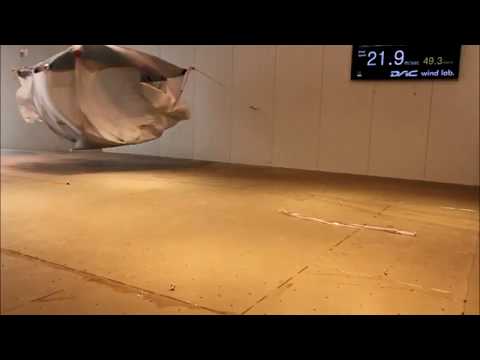 Taking the bike lane since 1978

Bike gear has been part of our DNA since the late 70s, and members could buy MEC-designed bikes starting in 2009. Along the way, we’ve supported cycling advocacy groups through our community programs, funded mountain bike trail building, and taught countless members how to fix flat tires or squeaky brakes at in-store bike workshops.

Nguyen Van Luong is a sample room manager and pattern maker and has been working at Sambu for 10 years. Sambu Factory is based in Ho Chi Minh City, Vietnam, where the Mountain Fountain 14 pack is produced.

In 2008, MEC was the first Canadian retailer to publicly disclose its list of factories and their locations as part of our commitment to supply chain transparency. Moving forward, MEC is expanding the list to go beyond factories and add suppliers further down in the chain. See how many people are involved in our infographic: it takes this many people to make your backpack.

Just one of the many projects your Co-op has helped support.

Every time you buy something at MEC, part of your purchase goes back to support local community projects to help get people active outside. That’s added up to $44 million and hundreds of local groups funded to date.

In 2019, our community program took its next big step and launched MEC All Out, which wraps our community events and investments into a single program that’s focused on getting Canadians running, climbing, hiking, biking, paddling, camping, skiing and generally playing outside. Some highlights from the past year included:

We’re also the founding partner of Leave No Trace Canada to help people learn how to camp and hike responsibly, have supported Avalanche Canada for decades, and continue to make members’ wild goals come true with expedition support.

Finally, MEC support has even helped with toilets, a critical (but not-sexy and often-overlooked) part of getting active outdoors. So far, MEC has helped fund at least 10 individual outhouse-related projects, including one named the “Pumpty Dumpty II Project,” which was a water-based program. If you count the alpine huts we’ve supported, which usually have a toilet in their plans, the number goes up to about 20.

Feels good when you wear it

To all the Co-op members: thank you! It’s been a wild 48 years, and we can’t wait to see what’s next.