Getting our hands dirty

When Arc’teryx challenged MEC to a trail building competition, we jumped at the chance to get dirty… plus we couldn’t resist a little friendly competition. Last November, dozens of MEC staff and supporters met up with the NSMBA to dig, grub and mine for gold on the North Shore.

Mobilizing a group of 87 people at 9:30am is never easy. At the trailhead, getting people organized was a bit like herding cats – if the cats you were herding had fire rakes and were hunting down coffee. Undaunted, MEC Trail Adoption Plan coordinator Sebastian (in orange, below) got us moving and caffeinated, then asked us to grab a tool from the jumbled pile and head up the trail.

Walking through the woods, we form a long snake of red and blue GORE-TEX, orange and green coveralls, plaid flannel and fleece with a heavy concentration of moustaches (it’s Movember, after all). Along with the 10am mist, bits of conversations float through the trees: plans to ride Expresso, Tuesday night trail runs, hiking up Fromme in search of a view. Further up and behind, words are muffled by the sounds of boots scuffing rocks and the cloak of hemlock, cedar and salal.

From an up-slope vantage point at our build site, Mark Wood, the Program Manager for the NSMBA, starts the day talking safety. He takes us through the types of tools and how to use them so that we – and the tools we’re holding – stay in one piece. It’s a message he’s probably delivered dozens of times before, and that some in our group have likely heard dozens of times before. Nevertheless, everyone pipes down and listens. By the end of the safety talk, even first-time trail builders know their fire rakes from pulaskis and their McLeods from mattocks.

“Alright, let’s get eight people with fire rakes, eight people with McLeods, a couple with shovels and pulaskis, and follow Terry,” Mark begins divvying our crew into more manageable groups of about 20, each one headed up by a build leader and designated their own section. It takes a few minutes to sort ourselves out, and the tool you’re holding pretty much dictates your role for next hour or so. 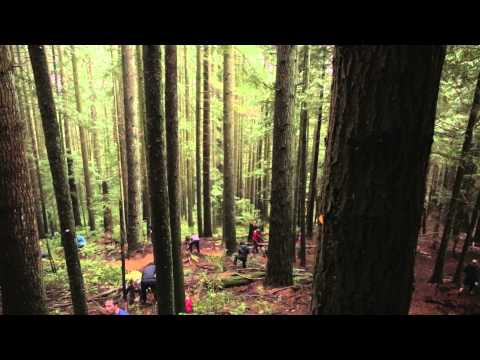 Small pink squares flag our route, marking the switchbacks of what will become the Skid Road re-route. When the re-route is done, it’ll be a multi-purpose trail and a sustainable solution to the old Skid Road, an eroded trail leftover from forestry days. Back then, things like water diversion and long-term use weren’t part of trail building – not the case on the Shore anymore. Now trails are made to last, while keeping the forest experience and treading as lightly as possible. Attention to environmental care and sustainable trail building practices are key to the NSMBA.

Crew with fire rakes start clearing a 2.5ft. corridor of logs, salal and branches, sticking to Mark’s “keep it tight, keep it right” philosophy. Following behind are people with McLeods, pulling back more duff to expose what we’re hunting for: North Shore gold. This golden-coloured mineral soil sheds water and packs down hard, so it’s prime trail material. In some spots, we uncover platinum-coloured soil, evidence of ashy deposits from a forest fire. In other spots, the duff doesn’t reveal anything but more duff. We grub and scrounge for rocks to fill these spaces so that the trail can support hikers, bikers, dog walkers and trail runners without dissolving into mud.

Soon, groups start splitting into other duties. Some are scooping shovelfuls of gold from a nearby “gold mine” into five-gallon buckets. Others are ferrying buckets from the mine to the trail, a short distance that seems longer when your bucket is full to the brim. Like real gold, this stuff is heavy. When break-time bananas appear, the shovels go down. (If you ever want to boost your ego, volunteer to be a snack runner on trail day.)

A small stereo gets plunked down at one of the switchbacks, and “Keep me searching for a heart of gold…” starts playing. Seriously? It’s like Neil Young has our backs as we shovel, carry, pour and shape gold soil. Soon the trail transforms in front of us, becoming a thin rich-coloured ribbon.

Shaping the trail is one of the last phases, and a favourite step for some experienced builders and accomplished rider. Stephen Matthews says this is what he likes best on trail days, as he gets to visualize what the trail’s going to look like and what it’s going to feel like to ride.

A thin ribbon of well-shaped gold.

After a final 15-minute flurry of bucket assembly lines, we’re done for the day. But before grabbing tools and heading down to the post-build barbeque, a few of us walk the whole new, fern-lined section. It’s kind of astonishing to see what other people have been working on and just how much got done in a few hours. That’s one of the cool parts of trail building – you’re so focussed on your own section that you’re oblivious to what’s happening up or down from you until the day’s done.

MEC CEO David Labistour and crew head back at the end of the day.

Keeping everyone fed is a big part of many trail days, and the people that weren’t digging were supporting the builders by dishing out snacks, firing up the barbeque, and having lunch ready to go as soon as we arrive back at the trailhead. The crew demolishes potato salad and sausages, oranges and brownies. Even though everyone’s coated in dirt and we’re huddled under tents in heavy rain, there’s a good vibe. “I’ve never been to a trail day where there’s a negative atmosphere,” Stephen Matthews says before he leaves. “Everyone’s just here to help.”

Solid job on a solid trail.

And as for the trail building competition? The NSMBA judges walked the two new sections to look at factors like drainage, naturalization, quality, length, and the overall finished product… and we’re proud to announce that MEC won top trail building honours in this competition.

In the end, though, it was really a win-win event for the trail system on the North Shore. We hope you have as much fun riding, hiking, and running it as we did building it.