Climber Sabrina Chapman and the 5.14a Titan Project

Titan is the project, and this is her story. 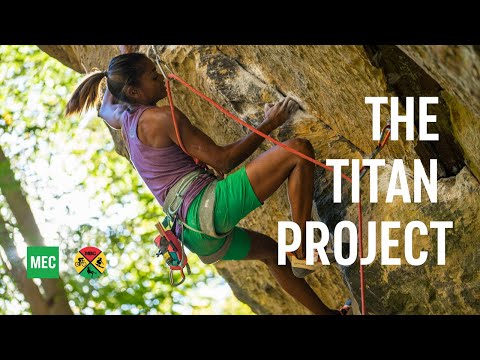 How did this project begin?

Sabrina: In March 2019, Danielle Williams (founder of Melanin Base Camp) and Aman Anderson (CEO of Beast Fingers Climbing) reached out to ask if I’d be interested in working on a film about how I got into climbing. I’m not sure how they got my name, but after some hesitation I said yes. A month later, I mentioned that I was going to Kentucky for a week, and suddenly Shane Smith, the filmmaker, contacted me to meet up so he could start shooting.

The Titan project is a means of telling my story as a daughter of immigrants whose path to climbing and pushing difficult grades is not shown in mainstream media. It’s an acknowledgement that there’s an audience for stories of BIPOC in the outdoors who are driven, determined and creating a world in their own image.

Why did you choose Titan?

Titan is located on Saugeen Ojibway Nation land. It’s about 36m (120ft) of limestone, and has two distinct cruxes. The first crux is to gain the headwall after roughly 15m (50ft) of long moves on small crimps with minimal rests on slightly overhanging rock. The second is about 21m (70ft) higher, and involves a shallow two finger pocket, a pinch and small footholds on a vertical face.

I love how long I get to be on the wall surrounded by rock and sky, and the moves are exactly what I enjoy in climbing – good body tension, strong fingers and mental focus.

How have the past few months impacted your training?

I injured my finger in 2019 and wasn’t able to put in attempts on Titan. In the first couple of months of quarantine in 2020, I was still focused on my goal of starting the season in top shape. I’m lucky to have a really good training set up at home, but when the protests began in the US and Canada, my motivations changed. A lot of repressed racial trauma resurfaced and I didn’t have the energy to stick to a training schedule.

Working out is part of who I am and how I manage my mental health, so I just listened to what my body needed day-to-day – moving around my wall, getting on the hangboard or swinging some kettlebells. Right now, my goal is to regain my equilibrium, and to relish being outside and on the rock without any expectations. That said, a while back I’d had a burn on Titan where I fell just below the lip; I pulled back on right away and went straight to the chains. What stands out about that attempt was how quiet my mind was. I pulled on the holds and stretched up through my legs with just the right balance of strength and grace. I’ve been holding onto the promise that I’ll climb that way again, which is why I know the 2020 season won’t end for me until I get back on and give myself that chance.

What barriers and goals have you been working through recently?

I have found it difficult to be at the base of Titan waiting for my turn while two to three other guys are working the route. The dynamics of trying to stay focused and calm within that energy made some days more exhausting than others.

One new goal I’ve created for myself is to move at a faster pace when I climb. So far it’s been really fun to learn a new way of moving across the rock while staying in sync with my body and I’m excited to keep working on that.

What’s your advice to womxn and BIPOC who want to start climbing?

For womxn and BIPOC who want to get into and push themselves in climbing: know that everyone is intimidated when they first start out, I know I was! A lot of gyms have intro classes you can take so you don’t feel like you’re the only one who doesn’t know what they’re doing. Search out other BIPOC on social media who are psyched to climb – we’re everywhere! Some accounts that I follow are MelaninBaseCamp, BrownGirlsClimb, IndigenousWomxnClimb, ClimbersofColor, BrownGirlsDocMafia, and HeyFlashFoxy.

What’s some of your favourite climbing gear?

There are a few pieces I go to again and again:

MEC Climbing Ambassador on a lifelong journey to connect mind, body and spirit in the natural world. Big fan of tiny crimps and weird beta.