Setting goals for 2018? Here’s some inspiration

Setting goals for the new year?

If you’re looking for inspiration, you’re in the right place. From ski-traversing an entire mountain range to trying backpacking for the first time, MEC members embarked on some incredible adventures this year. Check out the goals they achieved with support from our expedition grants – and then get busy planning your own epic 2018 adventure.

Team up to tackle an ambitious objective

“We created this traverse in the hopes of experiencing something so immense, so incredible, so epic that it would change our lives forever.” And epic it was.

The dynamic mother-daughter duo of Tania and Martina Halik successfully ski-traversed the entire BC Coast Mountain range from Squamish to Skagway. Along the way, they faced whiteouts, frigid river crossings and “unrelenting, soul-crushing, gear-snapping cold” – and enjoyed some lighter moments.

Tania on Brohm Ridge high above Squamish, BC, on day one. Photo: Martina Halik.

"Honestly it was just nice to change out of stinky multi-week clothes into something more airy." Photo: Tania and Martina Halik.

Want to see your name in the record books? 2017 saw several members achieve this goal.

Naomi on her record-setting climb of Mount Logan.

Huge congratulations to @lizrose5 who has just become the youngest Canadian to climb the seven summits! 🙌⛰🇨🇦#sevensummits #goodtimesoutside

As part of Expedition Ikivuq, a team of six paddlers explored northern Quebec’s Lestage River, which runs through Arctic tundra that has never been mapped or documented. Along the way, they endured harsh weather and gruelling portages, and were awed by the incredible landscapes and massive herds of caribou they encountered.

A quiet moment in this expedition loaded with adventure and obstacles. Photo: Francois Leger-Savard

When the local terrain got old, this group of mountain bikers set off for some new lines to ride… in northern India! From trails in the Himalayas to living root bridges in the remote northeastern corner of the country, they laid fresh tread in areas that had never previously been ridden.

Hanging out with the locals. Photo: Justa Jeskova

Be the first to do something

Steve Tersmette and Shawn Emmett were the first people to traverse the Purcell Mountains entirely on foot. During their 24-day journey, they travelled 271km and lost/gained just over 21,000 vertical metres.

Tricky footwork along the traverse and the steep, loose terrain. Photo: Steve Tresmette

Steve and Shawn, winners of the 2017 MEC Adventure Grant from the Vancouver International Mountain Film Festival.

Be prepared, but don’t be scared. Leaving your comfort zone can be a life-changing experience – just ask first-time hiker and camper Bruce Persaud, who tackled New Brunswick’s rugged Fundy Footpath. Start with episode 1 of his 6-part journey below – these videos are a fun must-watch before you head out on a challenging hike: 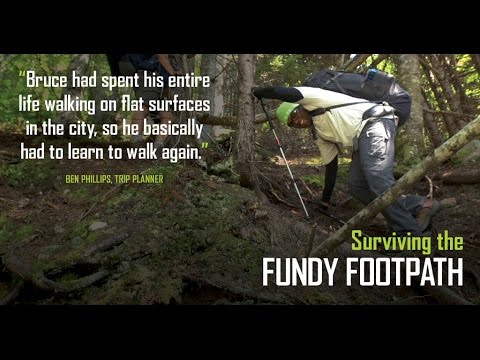 In 2018, MEC is supporting more expeditions, both close to home and around the world. From big-wall climbs in Powell River, BC, and free ascents of Patagonia peaks, to epic canoe trips from Florida to Seattle, members and grantees are bringing the stoke and ticking off some major goals. Follow @MEC on Instagram and Facebook to see updates from their trips.

MEC is proud to support these explorers and more through expedition support grants. Check them out as you plan for your own 2018 adventures.

Organizations, groups and friends we connect with to help get people active outside.