When adventure calls, you want to be sure you can keep up. And to do that, you’ll need dependable gear that’s been tried and tested by hard-charging explorers in some of the most rugged environments imaginable.

That’s where this award-winning gear comes in. When it’s survived waist-deep powder, rugged wilderness trails, gritty sandstone canyons and round-the-world trips with outdoor pros, you know you can rely on it to perform well for you, too.

Whether you call it the gear of the year, the editor’s choice or just the straight-up best outdoor gear, here’s what the experts recommend. And when you buy it at MEC, it’s backed by our legendary Rocksolid Guarantee – just in case.

“So light you’ll never want to leave it behind” is how Backpacker Magazine’s testers describe the Helinox Chair Zero, which won an Editor’s Choice Award in 2017. They’re right – the Chair Zero weighs as much as 500ml of water, and it’s almost as crucial to your next camping trip.

A bottle that filters water as you drink it and that collapses when empty to take up less room in your bag. Could there be a more useful tool for the adventurous traveller or avid backpacker?

That might be why the Katadyn BeFree Microfilter with Hydrapak has won multiple awards. Backpacker says it “fixes every problem with squeeze hydration” and the UK Outdoor Industry Awards named it the Product of the Year for 2017.

When a piece of gear makes it through Backpacker Magazine’s rigorous testing and earns a spot on the Editor’s Choice list, you know it’s solid. But when that gear stands out year after year and makes it into the Hall of Fame, you can bet you’ll love it.

That’s the case with the Gregory Baltoro 65 and its women’s specific counterpart, the Deva 60. “I hauled 50 pounds on treks in New Zealand, the Grand Canyon, and California’s Trinity Alps, and I never got sore hips,” one editor explained.

The team at Wirecutter has been looking for the best headlamps since 2013, and they still stick with their original choice: the tiny, affordable Black Diamond Spot Headlamp.

“Nothing this affordable can burn brighter or longer,” they explain. Plus, it weighs just 86 grams.

When it comes to award-winning base layers, one name topped several lists: Smartwool. After extensive head-to-head testing, the team at Outdoor Gear Lab named the Smartwool Merino 250 Crew and Merino 250 Bottoms as the Editor’s Choice for both men and women.

Wirecutter chose the Merino 150 Base Layer Pattern Long Sleeve for both men and women, saying “if you’re going to buy only one top, this should be it.”

Wirecutter’s testers say “no other pad can beat its balance of weight, warmth and comfort.” The Therm-a-rest NeoAir XLite Sleeping Pad offers luxurious comfort after long days on the trail, but when it’s time to break camp, it packs down to the same size as a Nalgene bottle.

Raise your hand if your gear bin has a half-used fuel canister or two. It might be enough for your next weekend trip… but what if it isn’t?

Instead of packing a full canister just in case, use the innovative Jetboil Jet Gauge to check how much fuel is left so you can carry only what you need. Backpacker Magazine gave this tiny treasure an Editor’s Choice Award, and it makes an excellent stocking stuffer (hint, hint).

Want to add a little luxury to your campsite or off-the-grid cabin? Blend up early-morning smoothies or project movies on the cabin wall with a little help from the Goal Zero Yeti 1400 Lithium, an amazingly convenient portable power bank. It earned a Peak Gear Award from Elevation Outdoors after it powered a portable fridge that kept testers’ food and drinks fresh for a week.

Looking for something a little smaller? Check out the rest of the Goal Zero power banks.

Friends don’t let friends travel with cotton towels – they’re bulky, they’re heavy when wet, and they take forever to dry. After 60 hours of testing travel towels in fresh and salt water, the team at Wirecutter picked the PackTowl Personal Towel as the best packable towel.

“It’s large and durable while still being comfortable and comes with an antimicrobial treatment, which means it won’t smell after multiple uses,” they write. “Whether used for camping, hiking, traveling, or general outdoor adventuring, this towel is durable enough to handle extended abuse while remaining soft and comfortable.”

When it comes to the best hiking socks, the competition is fierce. After 25 hours of research and more than 350,000 steps, Wirecutter picked the Darn Tough Light Hiker Micro Crew Light Cushion Socks. These merino hiking socks offer “the best mix of comfort, durability, and cushioning in a versatile height” – plus, they’re backed by a lifetime guarantee.

After testing the Osprey Atmos AG 50 on a 113km odyssey through northern Finland and an overnight trip to Colorado’s Heart Lake, the team at Elevation Outdoors named it the top pack in its summer 2018 Peak Gear Awards. Testers praised the “intuitive nature of its adjustments” and “the way the suspension melds to your torso and doesn’t bounce on extended treks.”

Sure, any old camp stove can cook your dinner. But can it charge your phone at the same time – and do it all by burning twigs?

That’s why the team at Digital Trends picked the BioLite CampStove 2 Bundle as the best camp cooking gear. The bundle includes a grill top and a BioLite KettlePot as well, so you’re all set to cook up a storm in the woods. 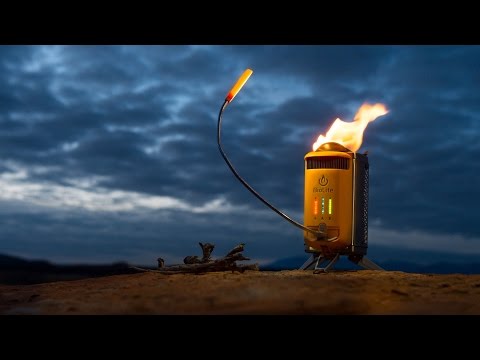 It’s been a leading industry beacon for nearly 10 years, so it’s no surprise to see the redesigned Mammut Barryvox S at the top of lists of the best avalanche beacons. “In testing, the S cranked through multiple [burials], reliably finding and marking each,” says Backcountry Magazine, which named it an Editor’s Choice for 2019.

The best skis let you go anywhere you want on the mountain, whether you’re chasing fresh tracks in far-flung bowls or charging down corduroy on the way to lunch.

Outside Magazine’s testers raved about the Volkl Secret, which they named the best all-mountain ski for women. “It’s powerful enough to bite into the hardest snow, but you can back off the gas and ski it easy, too,” said a former instructor.

“We’re pretty damn excited about this ski,” writes Blister, naming the Prior Husume as the best in its category for 2019. Freeskier agreed, naming the Husume an Editors’ Pick after testers praised its skiability in crud and variable conditions. And its good looks don’t hurt, either: the Whistler-made Husume features stunning graphics designed by renowned Haida artist Clarence Mills.

Planning to shoulder a big pack on a summer backpacking trip? Choose a burly hiking boot. Named the best boot for heavy loads by Outside Magazine, the Scarpa Kailash Trek GTX is supportive without weighing you down. Testers appreciated “the feel of a running shoes with the strength of a mountaineering boot.” Here’s the men’s version.

For three years in a row, Outdoor Gear Lab has chosen the Manduka Eko Mat as its best yoga mat. “It’s comfortable and stable, with great traction whether your palms are dry or sweaty,” the editors say. “Best of all is its durability; we used it for over a year and at least 100 classes, and it’s still in great shape.”

Not all chalk is created equal. When climber Matt Samet was struggling with cracked fingers and calluses, he decided to try Friction Labs Gorilla Grip Chunky Chalk.

“Boom, it delivered,” he writes in his review as part of Climbing Magazine’s Editor’s Choice Awards. “I found myself chalking way less, and the chunk-laden blend offered remarkable – but not overly dry – friction on the tiny-crimp and sloper-knob crux of my granite project, which went down the day I switched.”

“There are a handful of 360 cameras out there, but the Garmin Virb 360 – with its blend of simplicity, picture quality and trailproofing – is the best for hikers,” writes Backpacker Magazine, naming the adventure camera to its 2018 Editor’s Choice list.

“It’s rugged enough to record footage from inside a pounding waterfall and it survived a canoe capsize, rough packing and a 4-foot drop onto rocks.”

With an outer face that blocks wind and a gridded interior that traps warmth, the Patagonia R1 Techface Hoody is no ordinary fleece. After testing it on long rock climbs, winter trail runs and even nights out on the town, Elevation Outdoors named it the best fleece in its Peak Gear Awards. It comes in a women’s version as well.

Wearing leggings when you go hiking can be challenging – they’re prone to snags, they can chafe under a hipbelt and most of them don’t have pockets. So how did a pair of leggings earn a Backpacker Editor’s Choice Award? By solving all those problems.

Featuring a reinforced seat and knees, densely woven fabric, a high waist and three (3!) pockets, the Fjallraven Abisko Trekking Tights are “so stellar that they even won over the men on our staff.”

If anything’s going to hold you back on your next day on the trails, slopes or woods, it won’t be this gear. Where will these best-in-class pieces take you?

Find an MEC store near you

Editor, science nerd, runner and skier who loves rugged trails and glacier-fed lakes. May or may not own a quiver of MEC Rad Pants.